“Nothing is more dangerous than an idea, when you have only one idea.”
Émile Chartier. Propos sur le Religion no. 74 (1938)

We humans are tool builders. We’ve excelled, generation after generation, by looping through a surprisingly simple and primate process. A process which is all around us, and yet often goes completely unnoticed and desperately under appreciated. A process, without which, we’d still be stuck in the dark ages foraging for meals and trying not to die of something nasty.

Three cheers, therefore, for Innovation. Arguably human nature’s finest achievement. The painstaking process of identifying the world’s most pressing problems and fulfilling them with better solutions to make life quicker, cheaper, easier, cleaner, healthier etc. etc. There’s really no magic to it, “see a need, fill a need” as the saying goes.

So if innovation is all around us, and so important to our success as a living breathing species, how come it’s so damn hard? After all, not everyone wakes up an inventor every morning. How come it’s difficult to see the problems around us, even when they’re smacking us in the face.

If you’ve ever had writer’s block while starring at a blank page you’ll know exactly how painful it is to come up with anything new. Be creative! Give me the Solution, now! That’s a great theory, but it’s just not how ideas happen I’m afraid, at least not good ideas anyway.

Charles Babbage, for example, invented the first ‘computer’ because human computers (an actual job title) were so slow and prone to error they were causing accidents . Steam power and engines came about because, at some point, some one decided that just one horse’s power wasn’t enough.

“If you understand the problem then solution will be easy.”

In my experience the best ideas come when you understand the problem, they are the answer to someone saying ‘there must be a better way’. And, actually, when it comes down to it, there’s not a single thing that couldn’t be done in a better way, a cheaper, lighter or faster way.

But, you see, the thing is, if you don’t believe in the cause and you’re not prepared to immerse yourself in it, then it’s unlikely that you’ll find anything more than a superficial solution to a superficial problem. A new shaped widget, this season’s new variant of black, a slightly difference ratio of ‘i’ to ‘phone’. All very good, perhaps even profitable, but it’s not the stuff that drives mankind forwards.

I’m not saying that if you want to solve homelessness you need to sell your house, but if that problem makes you think ‘this situation isn’t good enough’ then you can’t solve it at a distance, we should be prepared to get out on the street and research.

One tell-tale sign that you’re at a distance from the problem is when phrases like ‘consumer experience’ start coming up. My response would be, get your hands dirty. One of the best ways to tune into problems is simply to record yourself doing a task. Be curious and meticulous. Henry Ford historically did this through Time and Motion studies, gradually eliminating waste until a car could be manufactured in minutes not days.

So, assuming you can clearly and succinctly articulate a well rounded problem. How do you come up with a mind-blowing new idea?

From a scientific standpoint, new ideas come about when new neurological pathways join up. What if I combine this widget with that gadget to do X? What if i turn it upside down? What if was 10 times smaller, or larger? Engineers, being engineers, even developed a set method for doing this called TRIZ

In fact, a mind-boggling number of inventions beg steal and borrow from anything and everything around like this. Punch cards in early computers, for example, were taken from knitting machines. Mechanical knitting machines borrowed from other machines, and so forth.

What is concept generation?

In new product development, the main idea behind concept generation is to look at the problem in multiple ways and from multiple viewports to create a range of solutions. If you have one idea, it’s certainly not the best idea out there. Go deeper. How could you build on that from a manufacturing viewpoint or from a retail viewpoint? Could it be simpler? It’s important to evaluate concepts critically, there’s no reason to continue with a bad idea, but it’s important not to give up on an idea too early. The best way to do this is always to strive to build on ideas, rather than discard or dismiss.

Which brings me onto one critical piece of advice. Good ideas rarely happen under stress and pressure and they certainly don’t happen in threatening environments. That’s probably why so many of those one hour brain storming meetings are a complete waste of time. Far better to go to the pub.

We humans are creative, brilliant and endlessly curious and as a species we’re pretty good at adapting and evolving, making do and mending. If you can’t fully and succinctly articulate the problem then the starting point is clear. Research by tuning into the problems around. Grab a camera and record yourself doing something. There’s plenty of people out there who can help you with that.

But don’t expect to solve the problem in an hour. History is littered with superficial solutions to problems that seemed good at a distance but ultimately became landfill.

Then again, history is also marked by moments of brilliance when people did the right thing even though it was really difficult.

How to Export Graphics from Illustrator to SolidWorks 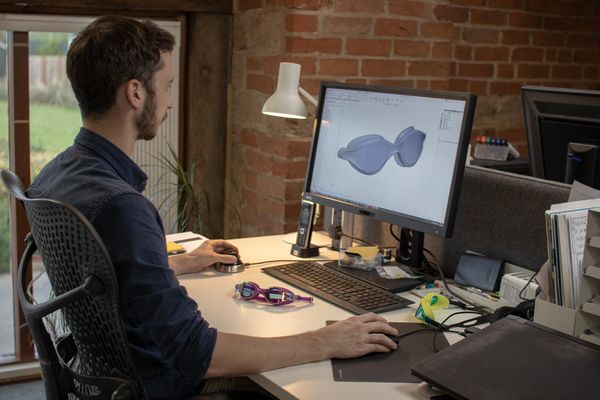 Exciting days to help you explore your idea. Whether you have well defined idea, or not, our concept exploration sessions can bring your idea to life.