The British Association of Toy Retailers named the Lego brick "Toy of the Century", beating the teddy bear, Barbie and Action Man. According to statistics, there are over 400 billion Lego bricks in the world and stacked together, they are 2,386,065 miles tall, which is ten times higher than the moon! With 7 Lego sets sold every second, the Lego bricks sold in one year would circle the world 5 times. Put it this way, there is no doubt that Lego remains 'a thing'...

Give any child a building set such as Duplo, Lego, stickle bricks or building blocks and you will witness the creation of an imaginary world, which evolves to suit their needs and preferences. Whether a car, house, Frozen ice palace or (most recently in the Raymont-Osman household below, the entire set of Disney’s Mauna and a rocket ship to the Moon!), the act of designing and constructing is exactly what an engineer does!

Whether it’s more complex builds which take weeks or even months to complete such as the 12yrs+ Hogwart’s Castle Lego set, or simple wooden block towers stacked and knocked over by a toddler, the premise is the same – these are steps into engineering where every action has a cause and effect as it does in the real world. Lessons on gravity, forces, load, balance, stability and even mechanisms can all be learnt from the simplest builds, which in turn, become bigger and more complex undertakings as children grow.

Growth mindset is key in developing those skills required by our future STEM workers. Children with a growth mindset believe that intelligence can be developed. These students see school as a place to develop their abilities and think of challenges as opportunities to grow – learning is prized over failure. Children with a fixed mindset believe that intelligence is fixed at birth and doesn't change or changes very little with practice.

Anyone who has battled a set of instructions to construct a Lego model will have, in order to have persevered and succeeded, relied upon a growth mindset. Whether it’s the fine motor skills required to manipulate the millions of fiddly components into place or making sense of a manual, putting together a Lego set can prove challenging and frustrating. The emotional resilience and ability to cope with (and channel) failure involved in physically making the thing work should not be understated. If you are looking for a task to cultivate a growth mindset, look no further!

The Gender of play

Another reason for encouraging our children to ‘play’ at engineering is in the development of a more diverse and capable workforce. Women are quite frequently accused of being less biologically-designed for STEM activities than men. Whilst there are some variations between the male and female brain, these differences are minimal and indeed miniscule in their effects on women’s aptitude for STEM. Furthermore, there are plenty of famous women in STEM who prove that they are equally as capable as men, so the question is, why aren’t there more of them? Nature is insufficient in explaining the lack of women in engineering and related sectors... for this, we must turn to nurture.

Research shows that girls show an interest in STEM until the age of Secondary school, upon which, engagement drops off dramatically. A report from the American Association of University Women (AAUW) shows that the learning environment and social belief system affect girls’ interest and achievements in STEM subjects. Furthermore, findings reveal that experience of learning expanded intelligence tasks, such as playing with Lego, have a direct correlation with greater scores on Maths tests, and in turn, the likelihood of girls in entering professions such as engineering. Thus, a “growth mindset” can have a massive impact on whether girls will keep their interest and motivation in STEM or whether this will wane over time.

Another study performed in Europe showed that how women are treated in a specific country has a direct correlation with how well girls perform on Maths tests and their likelihood of entering STEM professions. Thus, a combination of both emphasis on gender equality and encouragement of growth mindset has a direct impact on girls’ achievements in science subjects and future career choices.

Lego is a fantastic tool for the development of STEM skills in all children – we just need to ensure that all children have equal access. That is not to deride the skills gained from playing with dolls – empathy, kindness, roleplay (the list goes on…) or the need for boys to have the opportunities to develop these skills either. Despite it being 2021, research continues to report that STEM is still viewed as a masculine field of work. Recent studies report that society continues to view women in science and engineering jobs as less competent than men unless they are showing considerable success. And even then, people report to perceiving them less likable as individuals!!! No wonder, the lack of diversity in our workforce!

Following a recent global child survey commissioned by the company, which found that attitudes to play and future careers remain unequal and restrictive, Lego recently announced the removal of gender boas from their toys. This move is set to benefits boys just as much as girls: "Seventy-one per cent of boys surveyed, feared they would be made fun of if they played with what they described as “girls’ toys” – a fear shared by their parents. “Parents are more worried that their sons will be teased than their daughters for playing with toys associated with the other gender,” said Madeline Di Nonno, the chief executive of the Geena Davis Institute on Gender in Media, who conducted the research" (Russel in Guardian, 11/10/21).

In terms of our attitudes to girls, findings show that, as parents, we still tend to push our daughters towards dancing, baking and dressing up (five times more than boys in fact!) - even if this is subconsciously. On the other side of the coin, boys are still more likely to be encouraged to join activities involving sport or STEM than their female counter-parts. This is a major issue. There is no doubt that toys such as Lego and other construction sets can be viewed as 'training opportunities' - crucial to the engineers of the future. “So if girls aren’t playing with Lego or other construction toys, they aren’t developing the spatial skills that will help them in later life. If dolls are being pushed on girls but not boys, then boys are missing out on nurturing skills" - Prof Gina Rippon, a neurobiologist and author of The Gendered Brain (Russel in Guardian, 11/10/21).

For some time, Lego have been working hard to improve the inclusivity of its toys by investigating and consulting on the prevalence of gender bias and harmful stereotypes in its range. Traditionally, Lego has always been accessed by more boys than girls. The task now is to address this through the creation of toys which appeal to both sexes. The emergence of new lines such as 'Lego Dots' and 'Lego City Wildlife Rescue Camp' has been specifically designed to target both boys and girls in order to promote a range of skills which have typically been engendered: nurturing and caring as well as spatial awareness, creative reasoning and problem solving.

In October 2021, the world's largest toy manufacturer announced that they would cease to label any of their products “for girls” or “for boys”. No longer can parents search their website according to gender - these filters have been replaced by themes with the nomenclature 'passion points'. The key message is that children are being encouraged to play with toys that they would have traditionally perceived as ‘not for them’, in a move to create a society where children are not confined by the virtues of birth. Hats off to Lego for this!

It may start with a wooden block or a Duplo train set, but in time, kids learn to experiment and become much more ambitious in their builds. Success is reliant upon the generation of solutions and problem-solving: exactly what a career in engineering entails! Through experimenting with Lego, complex concepts are unwittingly understood, both abstract and concrete – all within the mind of a curious 4-year-old. The use of triangles as a key principle of construction… just one example of lessons learnt in our house!

As children stack, construct, knock-down and re-create, they are building much more than a model, they are growing a mindset and a set of life skills where the sky really is the limit! Lego involves the investment of time and effort – from parents as much as children - especially in those early days, but this effort will undoubtedly pay off further down the line. Not only is it an opportunity to put down the smartphone (we are a guilty as the next!) and be physically present with your child as you work towards a shared goal, but it is a chance to trick them into a bit of secret learning during the holidays, which might just open the doors to a fascinating future career, whatever their gender...

With this in mind, why not check these resources out this half-term?

12 STEM Activities to do with Kids

Many ways to play with Duplo

Want to get your child involved in the Games? 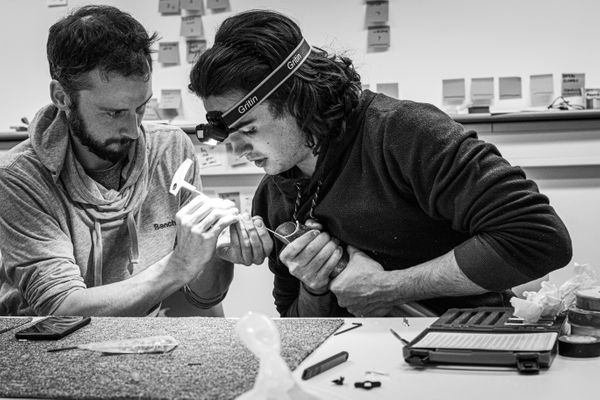 Kelly Raymont-Osman explains how engineering has proven to be central to the design and manufacture of the Queen’s Baton ahead of the Birmingham 2022 Commonwealth Games.