Several factors are evaluated when selecting the most appropriate process - such as product geometry, quality requirements and product aesthetics for example. Some processes will be immediately discounted based on the material specified by the client, or the inability of a process to meet the required standards dictated by the brief. In the event that there are several suitable processes, further consideration may be given to factors such as production volume and tooling costs. The point at which these considerations are introduced into the design process however, varies from Designer to Designer and company to company. But how, if at all, does the point at which this is first introduced affect the visual characteristics and functionality of the final product?

While the Design process itself is inevitably interpreted differently by every Designer, generally it can be summarised as a four-stage model:

Manufacturing intent could arguably be introduced within any of these stages.

Considering manufacture in the early stages of the process tends to ground ideas in reality sooner, with real world constraints and limitations considered at the earliest opportunity; thus allowing for a more efficient process. From a functional point of view, this approach generally results in products driven by function over form: the form and aesthetics considered at a later point, developing around the pre-existing function. This is accompanied by significant cost benefits. By considering the manufacturability of a design from the offset, DFM considerations progress with the development of the design. In turn, this enables Designers and Developers to reduce product timescales, often removing the need to later adapt or change a design to ensure that it is manufacturable, practical and functional. A win-win for the budgets of our clients!

The quality of a product is key. Using the approach of incorporating DFM from the get-go, Designers can design the constraints, limitations, and possibilities of particular manufacturing processes into a product’s characteristics from an early stage. The benefit of this being the minimisation of the number of issues relating to manufacture that are encountered over the duration of the process and resulting in a more considered final product. In terms of our clients, this can be seen as lower recall rates, better reviews and reduced costs associated with changes to tooling or the design itself.

An alternative method is to employ the use of ‘blue-sky thinking’ - deliberately removing manufacturing intent in a drive to encourage more imagination and creativity early in the design process. It is true that this method of design thinking tends to result in more ground-breaking or radical ideas, pushing or altogether ignoring technological boundaries and real-world limitations. Comparatively however, this approach can often prolong the design process, and as a result tends to be more expensive, with no guarantee of a feasible product at its conclusion. That safeguard employed within a DFM approach which aims to filter ideas according to their financial or manufacturing practicality is simply not there. When the Blue Sky Thinking method succeeds however, it almost always results in radically new products or technological advancements that have been developed specifically to bring an ‘unrealistic idea’ into the real world.

Companies that employ the use of blue-sky ideation are by no means any less capable of producing a product of the same quality and functionality as those who adopt DFM from the outset - although in general, they tend to be larger companies with access to higher budgets and more protracted timescales. They therefore have the time and resources available to resolve any manufacturing issues that arise as a result of introducing manufacture later in the process. The arguable lack in efficiency that results from using a Blue-Sky Thinking process is often minimised through having a higher number of people working on a single project. The physical result is a product that usually exhibits more futuristic characteristics and functionality, in some cases even being the first of its kind.

Ultimately the interdependent nature of every aspect of the Design process means that the point at which DFM is considered directly influences both aesthetics and functionality. However, there is no right or wrong way to design a product. The point at which manufacturing intent is introduced directly correlates to the needs of the individual client and the resources available. It is our job as Designers to interpret the needs of our customers and their businesses, to determine the most effective strategy that enables them to end up with a world-class product, that is aesthetically-considered, functional and manufacturable, but also remarkable. 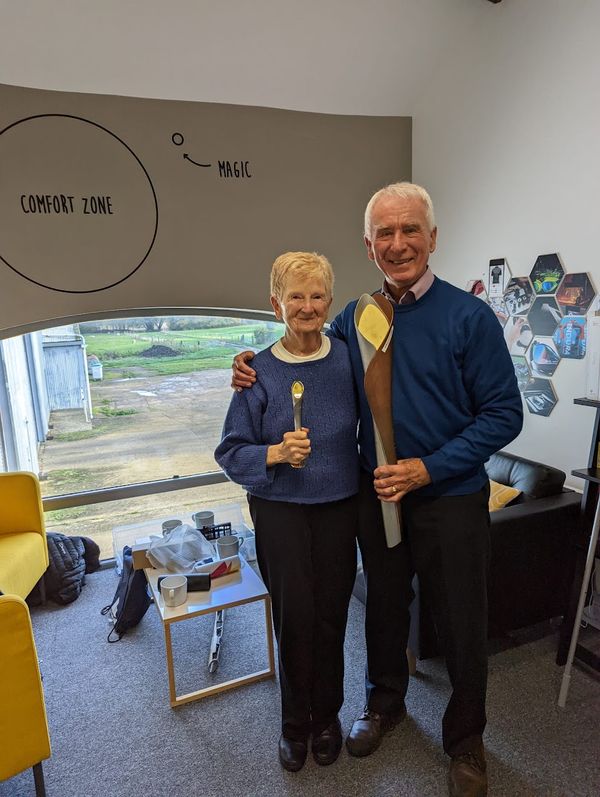 Meeting the ultimate end-user of the Queen's Baton!

What a privilege to welcome Queen's Commonwealth Baton bearer and general local hero, Les Barnett and his wife, Thelma, into the RO studio for a cuppa this morning! It was truly an honour chatting to one of the special few who transported the Baton around the UK in the run-up to this Summer's Games.

At RO, we're always on the look-out for exceptional people to do business with and support us to produce the best products for our clients in as environmentally responsible way as possible.